The Smart OS started with a phone call to Bob Woolley. I ask him if there was a way to have a ram based os that would work with spartados. He told me he was working on an internal ide in his 1200 xl. I asked him if he could build me a programmable OS. Bob Woolley built this Smart OS using a Dallas Smart Socket 32k by 8 S-Ram, Atari OS, 74ls10, 74ls00, and two switches. One switch swapped between the Atari OS and the S-Ram (holding a copy of Atari OS). The Second switch takes a S-Ram based OS in or out of write mode. This neat upgrade also has the basic area held in S-Ram. So I replaced my Internal Basic with Atari Assembler Editor. 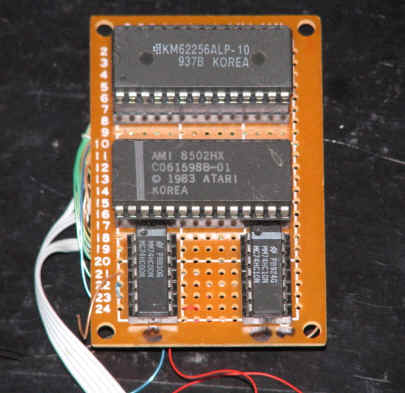 This upgrade worked well. I wrote some program that would wait for me to press a consol button and then copy OS or Cart code into the S-Ram when the S-RAM was placed into write option.

After a few more conversations Bob cam up with with a way to do this without a switch. A few weeks later Bob sent me a new board to me. I installed the board into a 130xe and it did not function with my Black Box or MIO. A few more conversation we figured out that we had mapped ram into $d6xx we had also found that we decoded the same address space that the MIO and Black Box used. I remapped the our switching logic into the d3xx and decoupled $d6xx and now my Smart OS is working with SpartaDos, RealDos and my PBI devices. Bob had also added a 512k battery backed up RamDisk. That was so cool I changed my RamDisk Handler to not format unless I send the command line parms to do so. 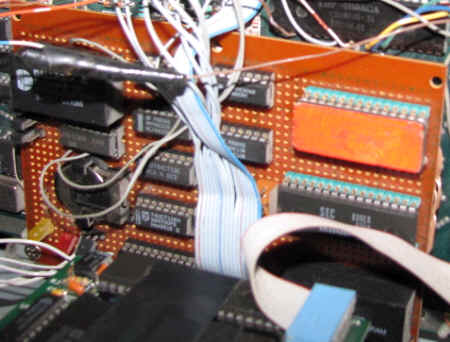 Here is a shot of the Woolley Smart OS you can see the standard 74lsxx chips. I started work on combining the logic into a 16v8 gal chip to reduce the amount of logic chips to support the RamDisk and the Smart OS. Here is a schematics that Bob Woolley cad for the Smart IDE that was modified to become the Smart OS 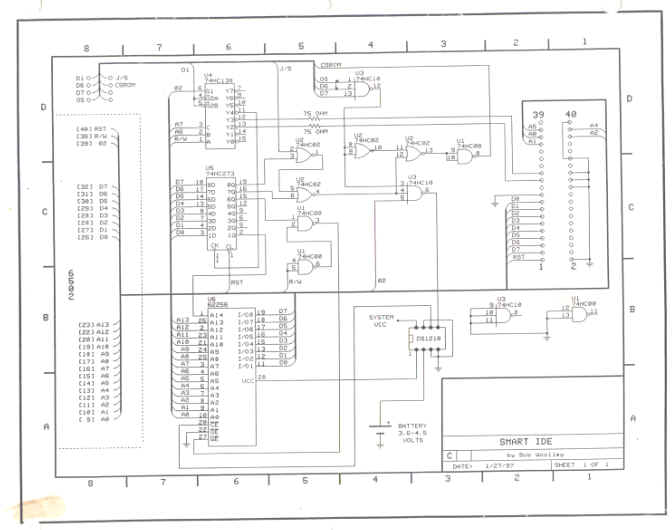 This schematics could be used to build a Smart OS however it will not function with a pbi device because $d6xx is mapped into the SRAM. This next picture is of the newest design that I have been using for 10+ years. It have dual 512k meg battery backed ram disks, Logic is on a GAL16v8, phantom 2k by 8 sram mapped into 8 banks of 256 bytes located at $d7xx an extra port with data line d0 to d7 and address lines to map 16meg (if someone want to build a RamDisk that size) This Board can have a rom chip in place of the second S-Ram. I am hoping I can get this all worked out to a surface  mount board for the 130xe. It is hard for me to describe how cool it is to have battery back RamDisk with the ability to swap my operating system from a binary file. I can change my font modify my OS recalculate the OS crc's save it as a binary file for use later. There are many cool multi operating systems. it is simple to split a 27512 into 4 OS's. AtariMax has a cool 32 in 1 OS. But my Smart OS is the only one that can run Bob Puff's Ultra Speed + Operating Systems. RealDos has been programmed to support the Smart OS. 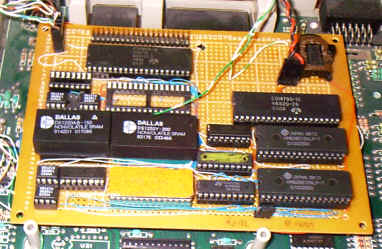 Smart OS is a SRAM based Operating System that will allow the user from SOFTWARE load any Operating System they want without having to change a the OS Rom or even open the computer that has the Smart OS board installed into it.  The Smart OS also has a battery backed RamDisk in it it. The Ramdisk can be configured as a 1 meg or two 512 meg. Could also have one RamDisk and one rom disk. Currently a prototype has been built! Full scale production of this hardware upgrade has not been completed yet. I am building what I hope will be the finial design for my Smart OS which must be able to support the Multiplexer and PBI devices. Send me an e-mail if you would like to know more.